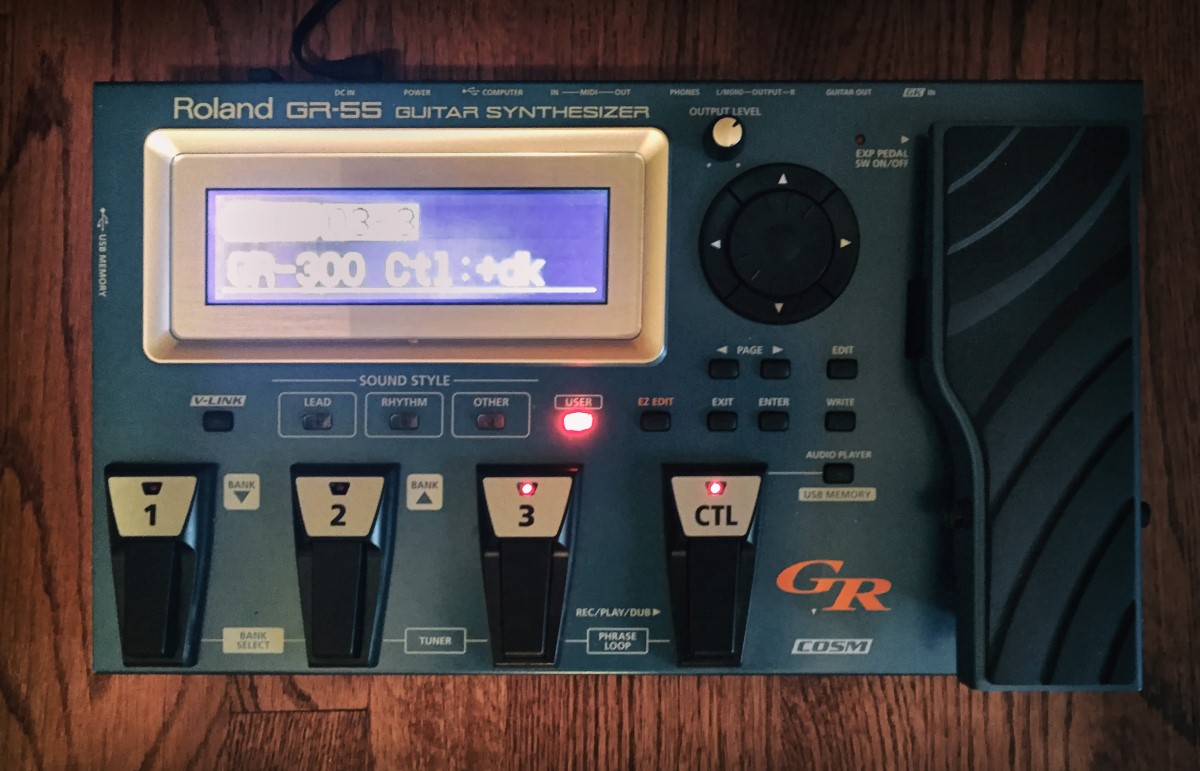 I literally had to hide my Roland GR-55 Guitar Synthesizer under the couch, safe from view. This unassuming piece of gear (it only sports a few buttons and five main foot controls), started taking over my life — 15 minutes just to “test out” a new sound design became 2 hours and 15 minutes later. As soon as you innocently dive into its vast functionality, you’ll find yourself late for work, lunch, or that important meeting — or worse yet, for dinner with your loved one who just left you seven voicemails because you couldn’t hear through the heavenly noise. Yes, the GR-55 is like an addiction, and pretty soon, there may be AA meetings offered for GR-55 users.

To start with the basics, you need a special GK pickup to tap into this magic box — either through the easily and temporarily installed GK-3 outboard version, which you can buy bundled with the GR-55, or a separately sold internal one called the GK-KIT [Tape Op #103 online]. I much prefer the latter because I’m an aesthetic snob, and I think the outboard version looks obtrusive on a classic axe. Of course, there are also a myriad of manufacturers that are making “GK ready” axes which I won’t go into here. Since I mentioned the look of the outboard pickup, I’ll quickly comment that the GR-55 floorboard itself is beautifully minimal in design and exceptionally constructed.

At first play, scrolling through the sounds, I admit I was underwhelmed and concerned. Like with many multi-effects pedals that give you a bajillion options, most of the presets are caricatures to demonstrate ability rather than nuance. The difference is the GR-55 transcends this with its many parameters and overlapping sound modules that can be micro-adjusted. The sonic flowchart goes something like this: At the top of the chain are three choices for tone. Two completely separate PCM synths can generate anything from convincing pianos to spacey galactic swoops. A separate COSM modeling tone gives you an arsenal of real and virtual axes at your disposal, including the venerable GR-300 made famous by Pat Metheny. And of course, there’s the normal pickup tone. By default, the modeling and pickup tones can be fed into a great set of COSM amp models and effects, while the PCM synths have their own multi-effects. The multi- effects can also be used for the modeling and pickup tones if you remap the internal signal flow. Finally, this can all be fed into a 20 second phrase looper.

The processing power of this beast is so vast and stable, that it can run all of this stuff simultaneously, without a glitch, for a sound that has incredible detail and nuance. I can’t stress how impressive this is — to this day, not one CPU glitch or any sort of lag — and switching between banks and patches is seamless, with fast and reliable string tracking. The thing that I found most addictive in this regard is building my holy grail “Franken- guitar.” Since each string is fed into the GR-55 with its own isolated micro pickup (see my GK-KIT review), you can use the modeling tone to tune individual strings to whatever heck note (or sound for that matter) you want. I built a virtual 12-string Telecaster in a Sonic Youth-type open tuning, with subtle layers of ambient square-wave synth swell, and grainy cello behind the tone to fatten it up. I fed it all through a virtual ’59 Marshall stack. The expression pedal allows me to sweep the lowest string only, so I can drop it an entire octave or to any note in between. No, this setup doesn’t actually exist in the real world, but man is it fun to play!

To have all these options in a studio setting is indispensable to someone like me, that doesn’t have loads of space and time, and travels a lot with a mobile laptop studio. As a kind of field test, I had a six-hour deadline to write and record a soundtrack for a video about my architecture firm that was exhibited by Modern Atlanta (MA). Starting from some modified presets, I recorded the entire track (except my tenor sax) through the GR-55, including footstep sounds, ambient shimmers, Rhodes electric piano, simulated EBow guitar, etc. Literally the next day, I hopped on a plane and had to meet another deadline creating the interactive soundtrack for a public sculpture my firm designed (called “Cloud”) that has now been published widely and won awards. Within a single day, I created and recorded a diverse range of pseudo-environmental and instrumental sounds, revised them at the client’s request, then fed the final clips to the engineer, just in time for the opening launch. Both of these deadlines would not have been possible if it weren’t for the functionality and clear ease of operation of this box.

Outside of the studio, for live performance, the GR-55 opens up amazing possibilities. The foot pedals marked Cntrl and Expression can be mapped to literally any parameter any which way, with the added bonus that the Expression pedal has an on/off switch also built into it (like in a wah pedal). But better still, the two buttons and variable knob on the GK-3 pickup (or in my case, the GK-KIT) can each be assigned any additional functionality, from controlling a single parameter or an entire patch. I’ve been assigning the buttons to access alternate tunings or to tap 12-string shimmer, and the expression pedal to roll in subtle tonal change by changing either multiple parameters simultaneously (like tone, volume, and drive) or a single parameter like vibrato speed. Often, to add dimension to arpeggiated passages, I’ll assign the synth sounds to the lower three strings only, and roll in their tone with the synth volume knob. Coupled with the toggle to switch between guitar, synth, or blend, during a live performance, this instantaneous versatility at your feet and fingertips adds incredible dimension.

If I were to bring up one pretty serious gripe, however, it’s the GR-55’s limited interface possibilities with a computer that ironically seems dated, considering how advanced this thing is. The ASIO driver for noiseless recording is fine and stable, albeit basic. But for something that can literally control your stage lightshow (via Roland’s V-Link), you still have to back up your painstakingly programmed sounds to a USB stick. And even though its built-in LCD display is big and bright, with all these parameters, you really need to be able to edit from your computer rather than constantly crouching over the floorboard. Fortunately, there’s a little piece of open-source software available on SourceForge called GR FloorBoard that can work as a computer editor, once you connect up the GR-55 via its USB port. However this third-party software can sometimes be buggy in unexpected ways, especially in restoring backups, which once cost me hours of heart/headache. Roland should have created a really cool recording/editing interface and maybe even a way to reprocess the sounds after they’re recorded. (Oops, now I’m beginning to talk about the GR-55’s little sibling, the GP-10, which I’ll hopefully review in the future.)

All in all, the GR-55 is mind-blowing and worth every penny and more. Its ability to track subtle dynamics and bends (once you take the few minutes to calibrate it to your specific axe) makes it feel like a natural extension of your guitar, rather than an awkward add-on. Its effects, models, and synths are musical and sound convincing, whether you’re looking for realistic replicas, abstract tones, or anything in between. It has revolutionized the way I play, compose, and record music; and at the end of the day, opening up vast creative possibilities is exactly what the best tools should do.

X-ray of the Past and Future A Genealogy of X performance – MMCA Seoul, Dec 3rd