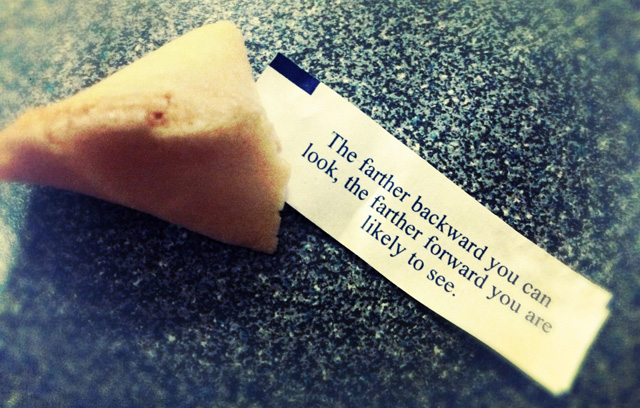 My architect alter-ego shared an interesting story with me recently: Usually during the holidays he receives bajillions of effusive cards from colleagues claiming how amazing the last year was and how the next year will be even better. This year the cards were a mere handful, literally a 10th of what usually arrives. Most sneaking into the mailbox quietly, demurely late to the party and leaving early without a word. More than a few did say something however that struck a convergent chord. Almost apologetically the phrases went something like: “2013 was a year of reflection,” or “we hope you grew and learned as much as we did,” and there was even a brazen comic themed one that read, “2013 sucked and we’re glad it’s over, let’s make 2014 great together!”

On December 23rd, I noticed an eerie lull in the city as I had my solitary ‘calm before the storm’ lunch at my favorite hole in the wall in Harlem. The fortune cookie’s message would not have been extraordinary if it wasn’t for the context of this blanketing 2013 sobriety. The further backward you can look, the further forward you are likely to see, it presciently read. The chord had been struck – both my alter-ego architect and myself are in a process of a slow and systematic archiving that feels like an overly analog endeavor in a lightning speed digital era. Previously, the fluttering of insubstantial christmas cards and exclamatory emails were enough to push aside the past for an optimistic new year. But the new year would come a week later and was it really that different from the week before? It would then be more #Scramble #GetThingsDone #Awesome #KeepGoing #NotGoodEnough #UntilTheNextTime until the next new year.

In the era of analog however there were ways of recollecting: rewinding the tape and playing it from a place you didn’t expect, lifting the record tonearm and strategically landing it again, re-reading the chapter just to relish it for the third time, organizing the years’ photos into a chapter-like sequence. This is as much about a nostalgia for these methods-as-metaphor as it is a call for making myths. If our lives are a construction of narratives that we ourselves build, our archives can be a slow process of re-construction in the effort to guide our future. After a kind of reverse starvation diet of only consuming music, I literally have dozens of new songs that are in the mix. However to keep them from becoming the superficial holiday card sent out with an obligatory exclamation, I’m hoping the stories from the past that will appear on this blog and facebook will give the present and future some depth and breadth as we all collectively inch forward. This year let’s all make a pact that last year’s ‘year of reflection’ will alchemically produce things and actions of beauty, substance, and transformation.